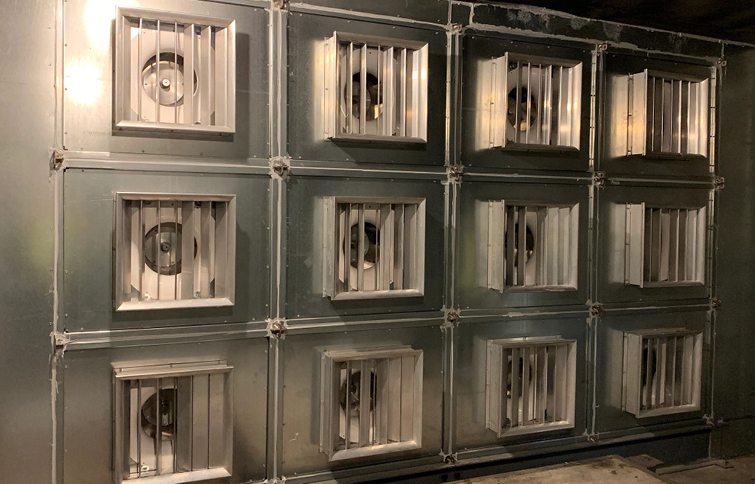 Many health care facilities are moving away from cooling systems with a single supply fan with a large, energy-dependent motor toward more efficient variable air volume (VAV) systems with a fan array controlled by a variable frequency drive. Because each fan in the array operates through its own controls, the air handler can continue supplying air even when maintenance is needed on an individual fan.

A medical center recently selected Messer’s Nashville team to lead a VAV and fan array replacement impacting two floors of the facility, including an OR suite. Messer completed the complex, meticulous work safely and on time—during the pandemic—due to a tremendous amount of planning and coordination with the medical center and a team of subcontractors, including Nashville Machine Company and Travis Electric.

“Not a single aspect of this project was easy. The ORs had to be turned over by a certain time for terminal cleaning before the next day’s surgery,” said Senior Project Manager Conrad Schneider. “We never missed a deadline, we had no major issues we couldn’t overcome, and not a single incident or accident occurred.”

As challenges arose, the team’s expertise, responsiveness and nighttime/weekend work kept the job on track.

The VAV and medium pressure ductwork replacement in the OR suite took place during the spring, summer and early fall of 2020, requiring extra precautions to work in a sterile environment during the height of the pandemic. A significant amount of utilities had to be relocated as ductwork was replaced piece by piece.

“It was complicated, dirty work that required us to get creative on how to access everything safely,” Schneider said. “The area was so compact that in some cases you couldn’t even reach your arm up through the ceiling because of plumbing ties, medical gas lines, conduit racks, pneumatic tubing and cable trays. In the end, we eased the owner’s concerns about the complexity because the coordination was going so well.”

Additionally, one of the ORs impacted by the project was for specialized emergency surgery. When working in that space, the team had to coordinate closely with the medical center regarding any incoming patients. Three times, they had to stop work, close up the ceiling and clean the space in less than 30 minutes.

Work paused toward the end of 2020 and into 2021 so the medical center could accommodate rising surgery census numbers. Then it was time for the shutdowns to install the fan arrays, which occurred over two weekends in May and June.

“We installed temporary duct, so while one unit was offline for replacement, the other unit could feed air to the remaining areas,” Schneider said. “Then we reversed the air flow in the temporary ductwork to get the other air handler system up and running. We learned a lot during the first fan array that allowed us to finish the second one a few hours ahead of schedule”

With the project complete, the owner is collecting data on the ROI of the VAV and fan array replacement in terms of estimated annual savings and energy reduction.

We use cookies on our website to give you the most relevant experience by remembering your preferences and repeat visits. By clicking “Accept All”, you consent to the use of ALL the cookies. However, you may visit "Cookie Settings" to provide a controlled consent.
Cookie Settings / Configuración de cookiesAccept All / Aceptar todo
.
Manage consent

This website uses cookies to improve your experience while you navigate through the website. Out of these, the cookies that are categorized as necessary are stored on your browser as they are essential for the working of basic functionalities of the website. We also use third-party cookies that help us analyze and understand how you use this website. These cookies will be stored in your browser only with your consent. You also have the option to opt-out of these cookies. But opting out of some of these cookies may affect your browsing experience.
Necessary Always Enabled
Necessary cookies are absolutely essential for the website to function properly. These cookies ensure basic functionalities and security features of the website, anonymously.
Functional
Functional cookies help to perform certain functionalities like sharing the content of the website on social media platforms, collect feedbacks, and other third-party features.
Performance
Performance cookies are used to understand and analyze the key performance indexes of the website which helps in delivering a better user experience for the visitors.
Analytics
Analytical cookies are used to understand how visitors interact with the website. These cookies help provide information on metrics the number of visitors, bounce rate, traffic source, etc.
Advertisement
Advertisement cookies are used to provide visitors with relevant ads and marketing campaigns. These cookies track visitors across websites and collect information to provide customized ads.
Others
Other uncategorized cookies are those that are being analyzed and have not been classified into a category as yet.
SAVE & ACCEPT
Powered by